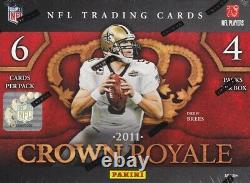 When the 2010 product season ended, those cards stood tall as some of the most striking of the entire year - not just in football, but across all sports. Last year these cards were an insert in football, this year they will be the Rookie Cards of all the 36 RPS Rookies. The good news: Rookie Silhouettes return in 2011. The better news: They'll all be signed on-card.

In terms of additional new bells and whistles that will really help 2011 Crown Royale make some noise, the Calling All Captains and Living Legends autographed memorabilia inserts immediately stand out. We're talking about the best of the best both currently in the NFL (Calling All Captains) and of all time (Living Legends). At Panini, we understand that a hit-per-pack product like Crown Royale must deliver value at both the pack and box levels, and the on-card autograph and prime-memorabilia content we've crammed into 2011 Crown Royale will be a huge part of this product delivering in a big way in 2011. Look for this years New Inserts: Calling All Captains, Crown Jewels, Knights of the Gridiron, Net Fusion. On-Card Signature Player Die-Cut Rookie Cards featuring Cam Newton, A.